A wonderful software for SD C4 Star diagnosis is specialized for experienced and professional engineer to refit or modify vehicles!!! 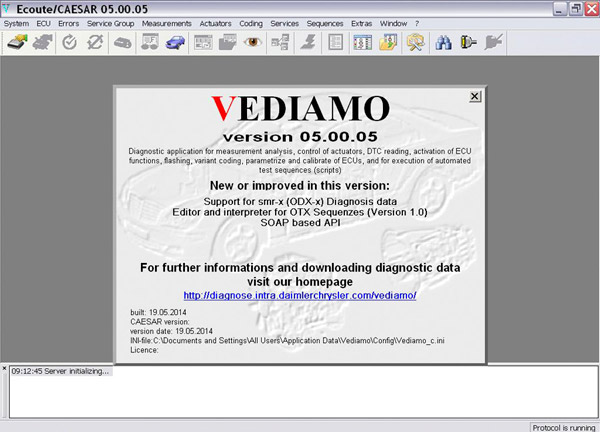 
The current version V05.00.05 Vediamo Development and Engineering Software is for SD C4 software new arrival on EOBD2. With Vediamo V05.00.05, you no longer need to apply online programming or offline to change the SA. You can now use Vediamo software any offline for car program, setting code, change the SA Code function. After you place order, we will provide download link of this software for you with activation license. It does not need to change IC and shipment. If you want a plug-and-play Star diagnosis, SD Connect Compact 4 with Dell D630 laptop would be a good choice for you, because Vediamo V05.00.05 will be pre-installed before delivery that you can use the bundle for diagnosis directly when you get it. You do not need to worry that you cannot successfully install Vediamo.

Vediamo Software is used by the plant engineers to develop diagnosis and engineering software, which is now used by Xentry and DAS, is based on the   super engineering version developed and delivered to the general customer service dealers’ use.

The use of   super engineering version has no limitation in diagnosis / modification / programming function are open which cannot be through the VEDOC (the original application code changes with flow) can be free to increase or decrease the SA code, modify the objective, for example: the increase of vehicles equipped with SA500 electric folding mirrors, commonly known as the Xentry and DAS development mode: open data project version in 2010 after the release, increase the number of functional limitations. So we will meet the vehicle version is too new to be into the control unit in use, or are unable to do any special modifications to the control unit.

For example: W204/212(2012) instrument to modify the area family configuration, or open other resource advantage function. Diagnosis / super engineering version of the code with code / modification / programming database using the Xentry database, so the   super engineering version is determined with the Xentry version, as long as the database is new and can be used in new models.


The latest version Vediamo V05.00.05 ( Vediamo Software) is used by the plant engineers to develop diagnosis and engineering software, which is now used by Xentry and DAS, is based on the   super engineering version developed and delivered to the general customer service dealers’ use.

Vediamo - the advanced diagnostic application for SD C4 (SP100-D & SP100-B)- is a software system for electronic control unit (ECU) diagnostics which is integrated in the CAESAR/DIOGENES process chain. It allows diagnostics on any ECU over K-line as well as CAN, and encompasses all established protocols from RTMD+, ISO, KWFB, KW2000 to UDS. Despite its name, Vediamo is no longer limited only to engine ECUs.

Vediamo is based on the - DCDI standard communication platform CAESAR and hence supports all communication hardware such as, e.g., Part C, Part A, Part Y, etc. DIOGENES data, used by all diagnostics applications in the company and which can be drawn from the central TAMINO data base, can be used as diagnostics data.

Most comment from users :
Offline programming would be handy! Thanks.

Back to top
Back